The Exquisite Geometric Art of the Shipibo: Catalogue

An inventory of my collection of Shipibo Artisan work. I have been collecting for many years and there are some exemplary pieces in the collection. I’ve assembled an 80 page catalogue of their beautiful work.

It is time to get these wonderful textiles and artisan work out of a trunk, and share them with the world. Many items are for sale, and a price list is included. In addition I’ve included an article about the unique geometric designs of the Shipibo people.

To see photo my photo gallery of Shipibo art on Flickr;

The Shipibo are one of the largest ethnic groups in the Peruvian Amazon. These ethnic groups each have their own languages, traditions and culture. The Shipibo which currently number about 20,000 are spread out in communities through the Pucallpa / Ucayali river region. They are highly regarded in the Amazon as being masters of Ayahuasca .

Foreword by Pablo Amaringo, to the book ‘Plant Spirit Shamanism’. 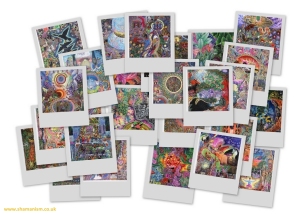 Pablo Amaringo is one of the world’s great visionary artists. He is renowned for his highly complex, colourful and intricate paintings inspired by his visions from when he was an Ayahuasca shaman. He trained as a curandero or healer in the Amazon, healing himself and others from the age of ten, but gave this up in 1977 to become a full-time painter and art teacher at the Usko-Ayar school of Amazonian art which he founded. His book, Ayahuasca Visions: The Religious Iconography of a Peruvian Shaman, co-authored with Luis Eduardo Luna, brought his work and the rich mythology of the Amazon to a wide public in the West.

A video montage of the great visionary artist Pablo Amaringo. Taken on visits over the years to his home and gallery in the jungle city of Pucallpa Peru.

The Shipibo and their beautiful Art and Crafts

The Shipibo people of the Upper Amazon in Peru, have a unique and complex form of visionary art. Underlying the intricate geometric patterns of great complexity displayed in the art of the Shipibo people is a concept of an all pervading magical reality which can challenge the Western linguistic heritage and rational mind.

To view a photo gallery of their beautiful art;

To read an article about the Shipibo:

Shipibo craftswoman Teresa, showing traditional painting. In this video Teresa starts with a blank piece of cotton and within an hour and a half completes a fascinating example of the traditional art of the Shipibo people of the Upper Amazon in Peru.

Click for a detailed article on the world of the Shipibo;

Click for Info on our Ayahuasca and Yoga Retreats in the Amazon Rain forest in Peru.

Click for details about our Ayahuasca and Yoga Retreats in Peru

The Ayahuasca Visions of Pablo Amaringo.