The History of Coca – The Divine Plant of the Incas

This magnificent book by W. Golden Mortimer, published in 1901 and long out of print, has been digitized by Microsoft for the  University of California and now available in the Open Internet Archive. The book contains nearly 200 hundred illustrations.

Coca Myths – a research paper by the Transnational Institute

A  very well researched and informative study from the Transnational Institute about the Coca (erythroxylum) plant.

The Huitoto people use coca as part of the social and ceremonial traditions. Here is Mariano the shaman with a coca bush.

As documented by the Transnational Institute:

The 2007 UN Declaration on the Rights of Indigenous Peoples – recently endorsed by the United States in December 2010 – states that “indigenous peoples have the right to maintain, control, protect and develop their cultural heritage, traditional knowledge and traditional cultural expressions.”

The decision to ban coca chewing fifty years ago was based on a 1950 report elaborated by the UN Commission of Inquiry on the
Coca Leaf with a mandate from ECOSOC, after a brief visit to Peru and Bolivia. The head of the Commission, Howard B. Fonda, gave an interview in Lima in September 1949, before beginning his work:

“We believe that the daily, inveterate use of coca leaves by chewing … not only is thoroughly noxious and therefore detrimental,
but also is the cause of racial degeneration in many centers of population, and of the decadence that visibly shows in numerous Indians – and even in some mestizos – in certain zones of Peru and Bolivia. Our studies will confirm the certainty of our assertions and we hope we can present a rational plan of action … to attain the absolute and sure abolition of this pernicious habit.”

To misquote Frank Zappa ..Imperialism is not dead it just smells funny.

The Huitoto people use coca as part of the social and ceremonial traditions. Here is Mariano the shaman with a coca bush.

THE SHAMANS OF PERU CD

Shamans of Peru – Recorded on Eagle’s Wing Journeys to Peru

Contains chants and dramatic effects of six different ceremonies with shamans who have worked with Eagle’s Wing Groups. Two ceremonies with San Pedro maestros working in the atmospheric ruins of Puruchucu; two ayahuasca shamans, a man and a woman, in separate sessions working in a jungle temple on the River Momon, outside Iquitos; a Shipibo shaman working in Yarinacocha, outside Pucullpa; and lastly, a despacho in the ruins of Pisaq, Cusco. In addition there are three tracks of atmospheric music played on pre-Colombian instruments.

A photo gallery from our March 2008 Andean Shamanism Retreat in Peru.

This month the UN’s International Narcotics Control Board recommended a ban on coca chewing and the use of coca in mass-consumption products such as tea in Peru and Bolivia. This is part of an attempt to crack down on cocaine production. Both Andean countries have defended the use of coca which has been used for medicinal and religious purposes for centuries and is part their cultural identity.

Millions of Indians have chewed coca on a daily basis for many hundreds of years, yet never has a plant been so misrepresented and its use so controlled by prejudice and ignorance, clearly including up to the present day.

The Incas regarded coca as ‘the divine plant’ mainly because of its property of imparting endurance, nevertheless its use was entwined with every aspect of life; the art, mythology, culture and economy of the Inca Empire and the Andean civilisations which preceded it.

Even today, distances are measured in ‘cocadas’ – how far an Indian carries his load under the stimulus of one chew of coca. But the ceremony which brings out the essentially shamanistic dimension is the mesa , and this unites the whole community.

The Peruvian and Bolivian governments criticised the UN report for only concentrating on coca cultivation as the basis for cocaine production and that it lacked respect for indigenous cultures. To protest against the UN recommendations, dozens of Peruvian Congress members chewed the coca leaf publicly. Indigenous activists led by the Congress woman Hilaria Supa also gathered in central Lima to raise awareness about the spiritual and cultural uses of the coca leaf. 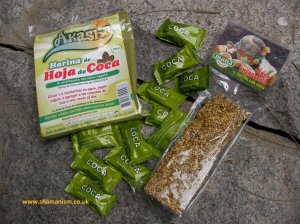 Healing Traditions of the Andes

Shamanism and the Healing Traditions of the Andes

Since the late 90’s Eagle’s Wing has conducted Ayahuasca and San Pedro Retreats in Peru. We have our 2008 programme available for viewing, downloading, or printing on this blog.

Visit our webpage for info on our Ayahuasca Retreats

Machu Picchu – located about 2,350 meters above sea level. It is one of the most important archaeological sites in South America. And it is also located in the breathtaking and awesomely beautiful Andes of Peru.

Soundtrack Music from ‘Shamans of Peru’ CD by Eagle’s Wing.

Coca, and the Spiritual Traditions of the Andean Shamans

Coca, and the Spiritual Traditions of the Andean Shamans PDF Article

Click for details on our Andean and Amazon Ayahuasca Retreats

The Ayahuasca Visions of Pablo Amaringo.